It is common for ancient sites to be linked with other landscape features, visible in the surroundings. In the latest part of this short series I would like to demonstrate how landscape features can be linked in folklore, using an example that straddles the northern boarder of the Peak District National Park.

The history and folklore of Castle Hill and its surroundings is long and convoluted, which has necessitated that I split this piece into sections. This first part pieces together the known history of Castle Hill and is a forerunner for the folklore that will follow in a separate part. 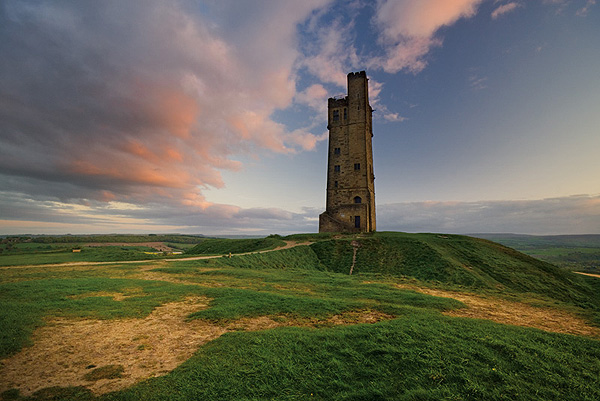 To the west of Huddersfield Town Centre near Almondbury, rises a flat-topped hill that dominates the scenery for miles around. Known locally as Castle Hill, this prominent hilltop has witnessed such a long and chequered history and folk tales swarm around it like bees around a hive.

Castle Hill is a multi-period hill top settlement, which has seen clusters of habitation followed by long periods of abandonment. The first people to use the hill seem to have been small bands of Mesolithic hunters in the form of short-lived camps. This was followed by a Bronze Age settlement, that enclosed the western tip of the hill, possibly on the site of an earlier Neolithic settlement. The remains of burnt huts from this period have been dated to c.2151 BC.

The hill seems then to have been largely abandoned until c.590 BC, when a new period of occupation began. The earthworks were extended to enclose the entire hill in the form of an Iron Age hillfort, with and imposing entrance at the eastern end of the hill. Later extensions were added to the earthworks, which were most probably topped with a wooden palisade. This would have made the hill into quite a formidable fortress and an important Brigantine stronghold.

This period of habitation came to an abrupt end c.430 BC when a fire destroyed a section of the ramparts and spread to the huts within the enclosure. Excavations drew the conclusion that the fire may have originated from the inner core of the ramparts (or possibly in waste matter thrown into the ditches) by spontaneous combustion.

‘Officials of the Yorkshire Division of the National Coal Board, who examined that section in the field, were of the opinion that the effects they saw resembled those they were familiar with in coal waste-tips and which were attributed to spontaneous combustion. Oddly enough, Professor Robert Newstead held a similar view of the ramparts I excavated at Maiden Castle, Bickerton and the Castle Ditch, Eddisbury. In both these cases, there was visual proof that the heat had not been applied outside the revetments of Triassic sandstone within which the affected cores were encased’ William Varley (1).

For many years it was assumed that an attack by the Romans had destroyed the fort, when in fact the hill had been unoccupied for over 400 years by the time the Romans arrived. Although excavations found no evidence of a Roman presence at Castle Hill, later resistivity surveys now suggest that there may have been a Roman observation post stationed on the hill (2). It would seem odd for the Romans to ignore such a prominent vantage point in their attempt to drive a road over the Pennines. Roman activity is well recorded in the area, with forts at Slack (Cambodunum) near Outlane, Castleshaw (Rigodunum) near Diggle and the remains of an inter-connecting road that probably forms a section of the York to Chester road that the forts defended until c.125 AD.

Another long period without obvious signs of occupation followed, until c.1130 AD when now in the possession of the crown following forfeiture of the de Laci family’s Honour of Pontefract, a motte and bailey castle was erected on the hill. King Stephen granted the castle to Henri de Laci in c.1137 AD.

The castle would have taken the form of a stone keep (standing on the spot now occupied by the Victoria Tower), surrounded by ditches and wooden palisades. The hill was divided into three baileys (inner, central and outer) and the earthworks extensively re-dug and extended. In fact, much of the earthworks visible today date from the Norman castle.

Norman rule was a dark period of English history. Regional lords acted like Kings and dispensed their own interpretation of the law by way of torture and death. A northern rebellion after the Norman Conquest had been cruelly crushed by William I, who raised York to the ground and continued his wave of destruction far and wide, in what became known as the ‘Harrying of the North’. The Doomsday Book starkly records numerous places throughout Yorkshire that had previously been prosperous under Saxon rule, but now were ‘waste’. 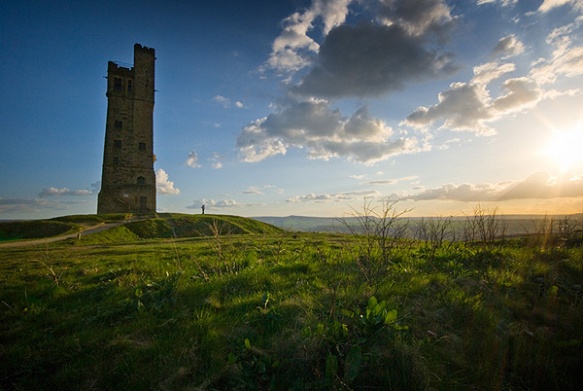 ‘When the castles were made they filled them with devils and evil men’ (3). This description seems to have also been true at Castle Hill as in 1307 the practices at the castle were examined by a jury after the murder of an unknown man in the castle dungeons, ‘that some person unknown, a stranger, had been murdered in the former Castle of Almondbury, and that his body appeared to have been devoured by worms, birds, and dogs; that he was killed elsewhere and his body afterwards placed in or thrown into that place, but by whom they knew not’ (4). By this time the castle was mostly being used as a hunting lodge by the de Lacis, who held many castles throughout the region, meaning that Castle Hill would have been held by a steward. This was probably just one of a number of dark deeds committed in the dungeons of the Norman Castle.

The castle passed to Thomas Earl of Lancaster as part of the Honour of Pontefract by way of marriage to Alice de Laci. By 1340 it had been demolished following Lancaster’s defeat at the Battle of Boroughbridge in 1322 against Edward II (his cousin). Thomas was beheaded at Pontefract Castle in 1323 and his lands forfeited. The well that dates from the time of the castle can still be seen to the south of Victoria Tower.

The modern history of Castle Hill has put it to various uses. It is speculated that there was an unsuccessful attempt during the 14th century to establish a village on the hill. A small battle took place nearby in 1471 at Hall Bower between the Beaumonts and the Kayes, during which Nicholas Beaumont was killed. In 1586, the antiquarian and cartographer William Camden reported that the castle ruins were still visible on the hill and that it had been the site of a Roman Fort and Saxon cathedral in which Paulinus preached. A beacon was light on the hill in 1588 to warn of the approach of the Spanish Armarda (and again during the Napoleonic Wars).

The hill’s modern use for recreation began during the 18th century with bare-knuckle contests and dog fighting. The original Castle Hill pub was built in 1811 to cater for the crowds that gathered on such occasions. During construction it is said that a ‘winding subterranean staircase’ was discovered. However, when the pub was demolished the old cellars were dug out and no staircase was found. It is possible that the discovery could have referred to the dungeons of the old Norman keep, as these were uncovered during the building of the Victoria Tower. The pub was rebuilt in 1852 and stood until 2004.

Castle Hill played its part in the social movements of the 19th century too. Being an area of textile manufacture, Huddersfield was at the centre of Luddite activity and of the fledgling trade union movement. The Chartists held a public meeting on the hill in 1848, the Secularists in 1861 and a large meeting during the Weaver’s Strike of 1883.

In 1829 a hoard of about 200 Roman coins and a handful of British gold coins was found at Castle Hill. Another hoard was found nearby at Honley in 1893 comprising of five British silver coins and eighteen Roman coins, dating from 209 BC to 72/73 AD (4). 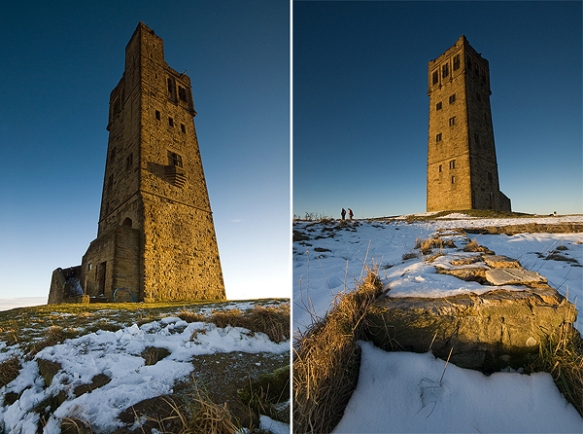 The Victoria Tower was opened on 24th June 1899 and was built to celebrate Queen Victoria’s Silver Jubilee. A tower on the hill had been proposed in 1851 but the agent of the Beaumont estate had objected to the idea. The tower is now an iconic local landmark and is open to the public on a handful of days each year.

(3) The History of Huddersfield and Its Vicinity – D.F.E. Sykes

(5) Early Man in the District of Huddersfield – James A. Petch