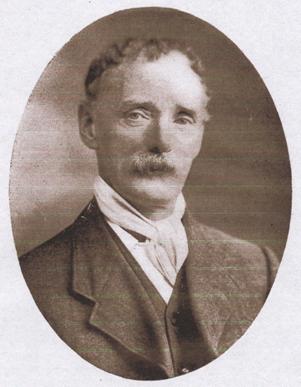 If you venture up on to Millstone Edge, at Standedge on Marsden Moor, you will be in good company. This little corner of the Pennines was so loved by local poet, writer and historian Ammon Wrigley, that his ashes were scattered near the Dinner Stone.

The views over Saddleworth overlook the places where he was born, raised and lived his whole, long life. Look closer and you will spot his memorial plaque. Now sat between those of his two daughters. 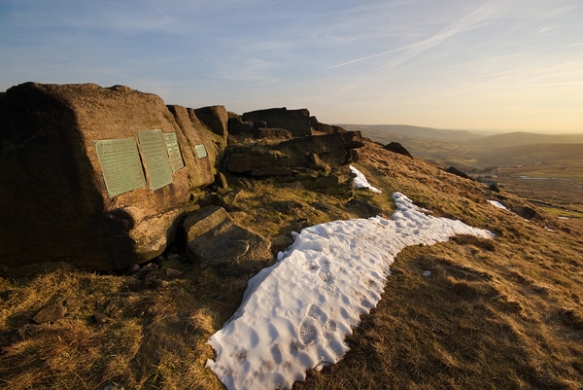 THE ASHES OF
AMMON WRIGLEY
BELOVED WRITER OF SADDLEWORTH
FOLK-LORE, PROSE AND POEMS,
WERE SCATTERED FROM THIS SPOT

HIS WAS THE SWEET AND GENEROUS SOUL
THAT LOVED NOT SELF ALONE
BUT TO OUR POORER NATURES GAVE
THE FRAGRANCE OF HIS OWN.

WINDS OF THE PENNINES FRESH AND FREE
YOU WERE EVER GOOD FRIENDS TO ME
OUT ON THE MOORS FROM MORN TILL EVE
HAPPY WITH YOU AND LOATHE TO LEAVE.

SO OVER THE HILLS I’LL TAKE MY WAY
AND MATE WITH THE WILD AND FREE
TILL MY DUST IS FLUNG TO THE WINDS
IN MY HILL COUNTRY.

Ammon Wrigley’s writings display the heart and soul of the Pennines. His love of those rocky uplands and the people that inhabited them, shines through his work. This is his story.

Born on October 10th 1861, at Far Hey, near Oxhey in Denshaw, into a typical working class family of the time. His father Thomas worked in the local mills, as did his mother Mary (nee Waddington). They later moved to Millcroft in Castleshaws Valley, where Ammon attended school.

Young Ammon received only the most basic education and suffered at the hands of poverty:

“One of the blackest memories of my early years is of a Christmas time. Work at the mill had been bad for over a month, and we were never more poverty stricken. We had no paraffin for our lamp and barely a barrowful of coal. If a neighbour woman had come into our house on the Christmas Eve, she would have seen a father, mother and two little lads sitting in silence and gloom as they watched a few red cinders die down in the grate.” 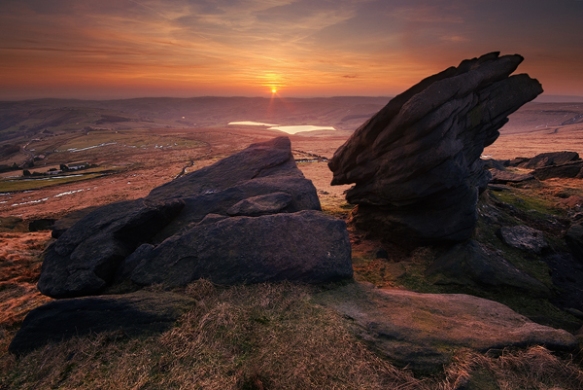 And one grey rock, like pagan god,
Solemn as death, and lone,
That oft, maybe, the hill tribes made
Their ancient worship stone.
On a Yorkshire Moor (excerpt)

In 1870 at the age of nine, Ammon began working half days at Johnny Mill, where his mother and father worked, later moving to Linfitts Mill. Ammon was quick to observe the irony that man had to toil away his days, while the cattle could laze away their days in the sunlight fields.

His love of writing began early. He was seven when his father awarded him three pence in appreciation of a poem that he had written about a wayside well. He would often recite Shakespeare for the amusement of his father’s friends.

Ammon was more than just a poet. His books gather up the soul of Saddleworth and describe a world now lost to us. He wrote of the local characters of the area, such as Joe of Ragstones:

The only scrap of homestead left in the neighbourhood is on the edge of the moors, a gable of Ragstones, famous as being once the home of an eccentric and somewhat scholarly recluse named Joseph Radcliffe, better known in the dales as “Joe o’th’ Ragstones.” The old-folk custom of calling men by the names of their farmsteads still prevails in Saddleworth.

Old Joe had a great deal of the hermit in his nature, and cared little for human company. He lived what is now called the simple life, just for the love of it, not as men do now, – merely to advertise themselves. The thing he set great store upon were his books, his dogs, and his lonely, battered old homestead. He had read much, and his knowledge of French history, particularly of the great Napoleonic period, was held to be fairly exhaustive. (1)

He had a keen interest in the history of Saddleworth and would often collect flints from March Hill. He rediscovered the Roman fort at Castleshaw. Originally rediscovered by Thomas Percival in 1752, but subsequently lost again under the plough.

One warm, dreamy morning in the August of 1897, I chanced to be idling away and hour in one of the high fields above Broadhead. As I looked lazily across the valley, I suddenly saw the complete outlines of the Roman Station at Castleshaw. Giving the field a careful survey I quickly realised that what I had just seen was no trick of the imagination, but, on the contrary, was a very tangible fact. Perhaps I was assisted to the identification by the fact that I was fresh from reading “Forty miles round Manchester,” an old 18th century work which contains a plan of the Castleshaw fort. It may seem a remarkable confession, yet it is none the less true that, although I was reared close to Castleshaw and had roamed over the camp field hundreds of times both before and after I knew something of its archaeological importance, I had seen nothing. I had entirely failed to observe the outlines which had been so clearly revealed to me that morning from the fields across the valley. What had remained, at close quarters, broken, detached, and unintelligible, when seen from a distance formed a compact whole, easily identified. (2) 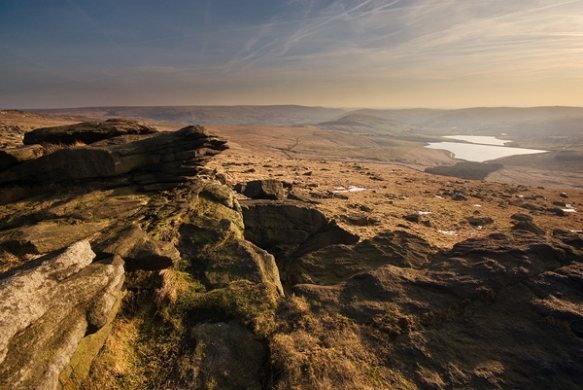 He also carried out excavation work at the fort, although his methods would undoubtedly make modern archaeologist baulk!

Castleshaw (extract)
Where the lordly moors of Stanedge
Shake the meadows from their feet,
Where the wind-words heather-scented,
Shape themselves to language sweet :

There in the weeds of silent mourning,
Lines of pain about thy brow,
Grey, old-fashioned country hamlet,
Sad and ruined standest thou.

Widely published during his lifetime, the Ammon Wrigley Fellowship was formed in 1931, to meet annually and celebrate his work while he was still alive. The Fellowship, already numbering over 200 members, held its first annual dinner in 1933. Ammon, well known for disliking public functions, did not attend due to the sudden onset of a ‘cold’. He was persuaded to attend subsequent dinners however and the Fellowship also organised outings to many of the locations featured in Ammon’s poems. The Fellowship lasted up to 1983.

Ammon died on 31st August 1946. His ashes were scattered near the Dinner Stone, as per his instructions, on a stormy September 14th by members of the Ammon Wrigley Fellowship. It is said that when Harry Walne, President of the Fellowship, opened the casket, the wind seized the ashes and carried them up and away. 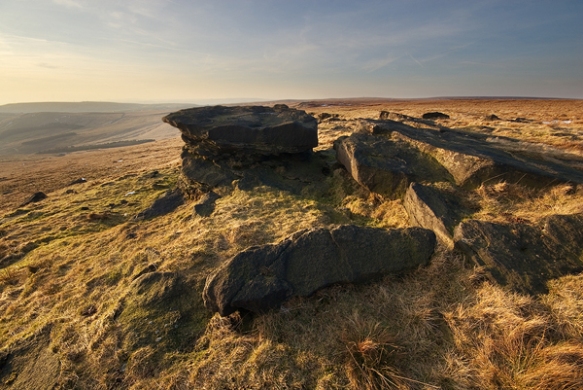 The Dinner Stone
Where the old rock stands weathered and lone
And black as night, turned into stone,
There’s a green church I call my own,
Take my ashes and scatter them there,
Roughly or kindly, just as you care.

Ammon loved Saddleworth and its people, but his main love was the Pennine Moorland around the area that he was born and raised. Most of his books are now long out of print and can be hard to find. However, it is still possible to piece together a collection by scouring second hand bookshops and keeping watch on various websites.

My response to Ammon’s work is very personal. I find it a source of wonder and inspiration that this man visited the exact same places that I now visit, one hundred years before me and felt much the same awe and attachment that I now feel. His words echo perfectly the sentiment of my photographs of this area, although separated by the passage of a century. When out on the moors around Saddleworth and Marsden, his words ring through my head and I am very conscious that I am following his footsteps. 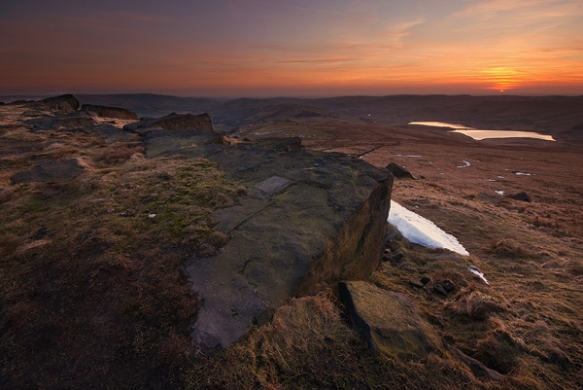 Ammon died twenty years before I was born. I would have loved to have met him and walked the moors with him, or conversed with him in the corner of an old stone Saddleworth pub. We are fortunate however that he left his knowledge behind in his numerous books and that his collections are preserved in the area where they were compiled, at Saddleworth Museum. I would urge anyone to visit that wonderful facility. The £2 admission fee is more than worthwhile and I would even suggest a small donation to help keep it open.

It seems fitting to leave the final words with Ammon:

I could wander through a hundred cathedrals, I could hear a hundred learned divines preach from carved oak pulpits, I could hear a hundred surpliced choirs sing the Nunc Dimittis and feel more impressed than if someone had whistled in my ear ; but I could not tramp across a solitary stretch of moor without being moved by some deep and incomprehensible influence ; the silence, the vastness, and the awesome mystery of the great waste lands awake a feeling which, if not exactly reverence, is closely akin to it. I sometimes wonder if this feeling is merely an impression produced by great contrasts, say, where one has been hemmed in all week by man, ­− his works and his artificialities, − and then comes to be set down among the calm sincerities of lonely moorlands, where mighty forces, obeying unwritten laws, work silently and unceasingly age after age. The moors take the pride out of a man, the humble him by making the span of his life seem even more trivial than it really is ; their vastness makes his smallness even smaller ; to be conscious of this feeling now and then does a man good, it sets him square with himself and prevents him from having a “ swellhead.” (3) 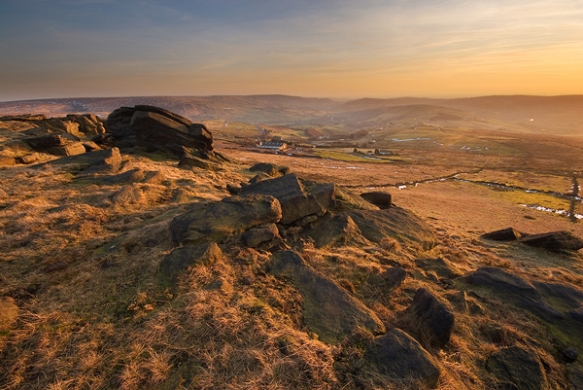 (2)  The First Excavations of the Roman Camp at Castleshaw – Songs of a Moorland Parish 1912.

Many of the details of Ammon’s life were taken from Sam Seville’s book, With Ammon Wrigley in Saddleworth.

This site uses Akismet to reduce spam. Learn how your comment data is processed.